The Night Before a Prospect Visit 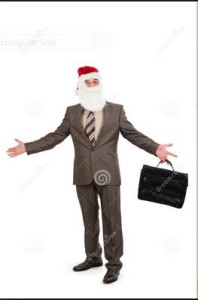 The Night Before a Prospect Visit
‘Twas the night before a Prospect Visit,
when all through the town
Not a person was stirring,
not even a city councilperson’s gown.
The incentives were all written with care,
In hopes that a business soon would be there.
The city leaders were nestled all snug in their beds,
While vision of workers danced in their heads:
And ED staff at their desks and I in my cap,
Had just settled our brains for a long winter’s nap-
When out from the newspaper
There arose such a clatter
I sprang from my desk
to see what was the matter.
Away to the available site I flew like a flash,
Roared down the street, and tried not to crash.
The moon on the breast of the new fallen snow
Gave the luster of midday to objects below;
When what to my wondering eyes should appear,
But a giant bus full of prospects so dear.
With a little old driver, so lively and quick,
I knew in a moment it must be company code name, St. Nick!
More rapid than eagles his search criteria came,
And he whistled and shouted and asked them by name.
“Now, Transportation! now, Utilities! now, Permits and Skilled Worker
On, Incentives! on, Land Prices! on, Legal and Infrastructure
To the top of the state, to the top of city hall,
Now, give away, give away, give away all!”
As we pull together data and prices so low,
We hurry up and wait and go with the flow,
So, all the offers were given in duplicate form,
With spreadsheets full in hopes we weren’t the norm.
And then, in a twinkling, I heard from the site selector
The gnashing and gnawing of each little offer.
As I closed down my laptop and was turning around,
Out of the bus the site selector came with a bound:
He was dressed in a suit,
And his briefcase was full of all sorts of electronic loot.
A backpack of papers he had flung on his back,
And he looked like a peddler just opening his pack.
His eyes, how they twinkled! His snear, how scary!
His cheeks were like roses, his nose like a cherry;
He got to work reviewing the site,
He looked and he looked for everything that’s not right.
And he answered the phone multiple times,
And I knew he was getting lots of emails when I heard all the chimes.
He was efficient and terse- a right business like chap:
And I smiled when I saw him, in spite of myself;
A wink of his eye, and a nod of his head,
Soon gave me to know I had everything to dread.
He spoke not a word but continued his work,
And checked all the boxes, then turned with a jerk,
And, laying a finger aside of his cell phone,
And giving a nod, he called out the drone.
He sprang to the bus, to his team gave a whistle,
And away they all drove like the down of a thistle.
But I heard him exclaim, ere he drove out of sight,
“You have until tomorrow to make this all right!”
By Clark Smith with some help from Clemont Moore